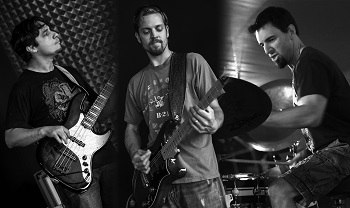 Guthrie Matthews (guitar/vocals), Jesse Masone (bass), and Chris Dorr (drums) are the Guthrie Matthews Method, a rock-funk trio hailing from the Eastern Shore of Maryland offering a perfect blend of all styles ranging from soul to roots to progressive rock filled with funky grooves, powerful vocals, and dynamic melodies.

Guthrie’s earliest influence came by way of the blues, introduced by his father, Bill Matthews, a talented guitarist and song writer. Expanding his repertoire to include country, rock, metal, R&B, reggae, hip-hop, jazz, and pop, he’s been working with and opened for various artists all over the East Coast throughout the last ten years.

Jesse’s been playing bass for over 20 years, focusing on hard rock, jazz, jam band, and world music. After attending the Berkelee College of Music in Boston, he has worked with Fez Cat, Mixed Signals, and Jordan Page. Jesse’s innate ability to lay down a full and melodic foundation gives the audience an illusion of a much larger band.

Greg began playing with his brothers at basement parties, local bars, and clubs at 14 years old. At 21, he had his first recording contract with Starpoint, which had signed to Chocolate City Records, a subsidiary of Casablanca and Polygram Records. Later, Starpoint recorded an album with Elektra Asylum Records, “Restless”, which sold over 600,000 records.