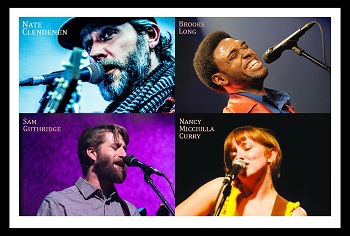 Bob Dylan’s musical genius is nothing short of legendary.  As a lyricist, he is unmatched.  As a performer, he has continuously changed the landscape of folk, rock, and popular music for over a half century.  As a cultural force, his musical influence is seen across all genres and generations since his 1961 debut in New York City’s Greenwich Village.  Thursday May 30th, 2019 at the Stoltz Listening Room in Easton, MD join four of the region’s premier songwriters in a celebration of Bob Dylan’s 78th birthday as they perform their favorite selections of the vast, enduring body of work created by this Nobel Laureate.  This “one night only” performance will feature singer/songwriters Sam Guthridge (the High and Wides, Only Lonesome), Nancy Micciulla Curry (Ginger), Brooks Long (Mad Dog No Good), and organizer/common thread Nate Clendenen (Eastern Electric, Clendenen Brothers, Saltwater Stringband, Joey Harkum Band) and tickets are $25.

This is the 8th such event that Nate has hosted and the 2nd to be held at the Stoltz. Attendees should come ready to hear an evening full of Dylan gems, original material, and collaboration.

Sam Guthridge (Baltimore, MD) - As one of the region’s foremost banjo players, Sam is one hardworking bluegrass picker. In addition to being a founding member of the much celebrated and now much missed “Shoregrass” group Chester River Runoff, you can currently catch him performing with his new project, The High and Wides out of Baltimore and Only Lonesome out of Washington, D.C. Sam is an accomplished songwriter and his material instantly stands as authentic contributions to the fabric of our region’s folk/bluegrass/americana culture. Sam is also a dedicated banjo instructor and can be reached for lessons through Appalachian Bluegrass in Catonsville, MD.

Nancy Micciulla Curry (Rehoboth Beach, DE) - Pronounced “mih-choo-lah”, you may recognize Nancy from your past vacation down to the coast. She is a singer/songwriter/guitarist and leads the group Ginger (formed with husband Mike Curry of Love Seed Mama Jump), who performs throughout the year to packed houses up and down the Maryland/Delaware beaches. Nancy is also steeped in music of all genres and has a voice that can bring a room to stand still - full and gritty yet delicate at the same time. In addition to performing, Nancy is very dedicated to family music education. As owner of Makin' Music Delaware, she teaches music classes for children ages birth-5 and their families, travels to preschools and daycares, and teaches at The Jefferson School in Georgetown, DE.

Brooks Long (Baltimore, MD) - Brooks is a Baltimore soul singer/songwriter who has shared the stage with such varied acts as Trombone Shorty, Rebirth Brass Band, Lucero, Cris Jacobs, and countless others.  In 2014 he and his band Mad Dog No Good were named "Best Real R&B" in Baltimore City Paper. Brooks then began an apprenticeship with Wendell Holmes of the renowned blues/roots project, The Holmes Brothers. In 2015 Brooks launched “The Songster Part 2”, continuing his independent, multi-genre recording series. Later that year, Brooks Long & The Mad Do No Good recorded and released their debut, Mannish Boys - with their single "Got Soul", subsequently being voted one of the best songs of 2016 by independent radio powerhouse, WTMD out of Towson University.

Nate Clendenen (Berlin, MD) - Nate is an Eastern Shore-based singer/songwriter who performs both locally and nationally with a variety of projects that span multiple genres of the roots music spectrum. He primarily fronts his electric rock/country/blues group Eastern Electric, bluegrass bands Clendenen Brothers and Saltwater Stringband, and is even currently touring with songwriter Joey Harkum as his bassist.  Raised on his parent’s folk, bluegrass, and rock of 1970’s, Nate has always drifted towards twang. Whether it’s flatpicking bluegrass, gritty rockin’ blues, or strumming solo, his music has taken him far and wide.  Nate Clendenen has released multiple recording projects, most recently Eastern Electric’s series of EPs, entitled “Words Girls & Games - Vols 1 & 2” released in 2016 and 2017 respectively.