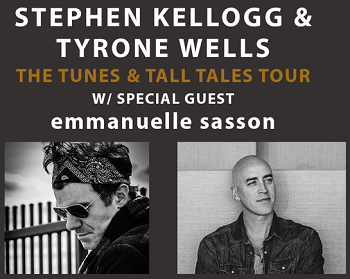 BBC Radio calls New England native Stephen Kellogg’s music “beautifully crafted songs from a master singer songwriter.” For over a decade, he has performed more than 1,500 concerts around the world, raised thousands of dollars for causes close to his heart, been named Armed Forces Entertainer of the Year, and earned a Grammy nomination with legendary guitarist Robert Randolph for "Best Contemporary Blues Record."

As a son of a preacher, Tyrone Wells was only allowed to listen to gospel music growing up in Spokane, WA, although he was eventually also exposed to artists like Stevie Wonder and James Taylor. Since beginning his solo career in 2000, he’s developed these and other influences into several acclaimed releases, such as his album “Remain” and its first single, “More”, which reached #13 on the Triple A radio charts.

A few stat lines for Tyrone that might impress you:

Few people sing so honestly from their heart and soul as teen pop artist Emmanuelle Sasson, as she demonstrated last year in her debut single, “It’s Not Me.” Playing guitar since she was six, Emmanuelle’s songwriting talents turn every day challenges and pain into her inspiration. “Every time something not-so-great happens in life,” she says, “I just think to myself, ‘It’s okay, I’ll write a song about it.’”