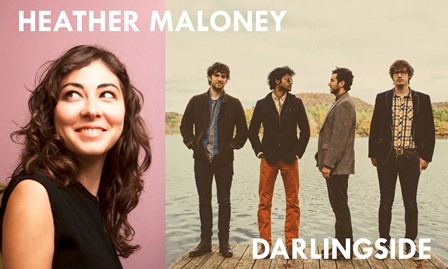 careers in late 2009 in Northampton, MA, crossing paths only through

overlapping posters pinned up on cork boards across town and occasional

scene of the Pioneer Valley, both artists grew from regional headliners to

nationally touring acts in a few short years. In November of 2013, Maloney

and Darlingside teamed up for a tour out to the Midwest, and it did not

combination. A feature in the New York Times of their cover of Joni

was released by Signature Sounds on March 11th.

Heather Maloney is a western Massachusetts based artist who has

received numerous accolades for her startlingly soulful voice and

No Depressionraving "Her music is riveting, her voice adventurous, her

folk...” while Blurt Magazine wrote "Heather Maloney is one of the most

Darlingside is a Massachusetts-based indie folk quartet. With four distinct

voices clustered around a single microphone, their tightly arranged tunes

draw from the unexpected, featuring strains of bluegrass, classical, and

barbershop. Accompanied by an arsenal of classical strings, guitars,

from song to song, keeping audiences across the country on the edge of

their seats: "Darlingside are doing something new in pop music...ground

This show will be an unforgettable musical moment you won’t want to miss!