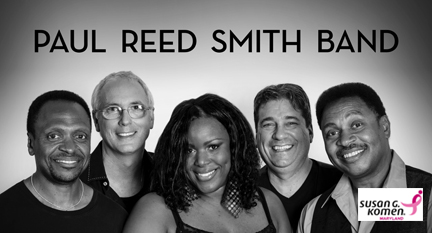 Come out for a great music event while making an impact on the lives of those who are affected by breast cancer.

The Paul Reed Smith Band performs all over the world including England, Germany, Japan, Canada, and Italy, and we are thrilled to have them at the Avalon Theatre! The band describes their music as "Chesapeake Gumbo" – an Annapolis/ Baltimore music style that is a combination of funk, rock, R & B, jazz, fusion, gospel, New Orleans Meters, hiphop, and melodic instrumental music. That about sums it up!

The music is anchored by the world famous Grainger brothers rhythm section and is accompanied by Michael Ault (guitar), Mia Samona Davis (vocals), Benjie Porecki (keyboards), and Paul Reed Smith on guitar. The band will be performing songs from their recently recorded CD, some old favorite band compositions from previous CDs and some very famous songs (like a great Tina Turner rendition of Proud Mary). A great time is guaranteed by all. Paul personally guarantees that you are gonna love this show!

Paul Reed Smith is the founder and owner of PRS Guitars. Smith is considered to be one of the preeminent master guitar makers in the world, with clients including Carlos Santana, Jimmy Page, Dave Matthews, Dave Navarro, Ricky Skaggs and others.

This concert is a fundraiser for Susan G. Komen Maryland.  The net proceeds from this event will go to support community grant programs which provide access to screening, treatment, clinical trials and a range of support services for survivors and their families across Maryland, while also supporting national research.

The premium ticket ($75.) includes a pre-concert reception in the theatre, which will begin at 6:30pm, including food and a drink and a chance to meet Paul and his bandmates.  There will also be a live auction of a PRS SE Custom 24 guitar.  General admission ($40.) includes the concert only, with access to a cash bar.