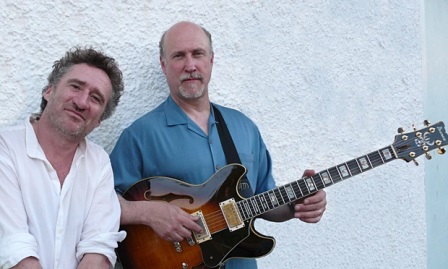 With two combustible talents like John Scofield and John Cleary joining forces, this show is sure to send off 2015 in a musical blaze of glory!

Aside from being one of the principal innovators of modern jazz guitar (he's played with Miles Davis, Charles Mingus, and Chet Baker), John Scofield is a creative artist of an even rarer sort: a stylistic chameleon who has forged a consistent, rock-solid aesthetic identity.

As an artist who has also collaborated with Mavis Staples, Government Mule, and Phil Lesh (among others), he's expressed himself in the vernacular of bebop, blues, jazz-funk, organ jazz, acoustic chamber jazz, electronically tinged groove music, and orchestral ensembles with ease and enthusiasm.

Jon Cleary is known for his salty-sweet voice, masterful piano skills, and a knack for coupling infectious grooves with melodic hooks and sharp lyrics.

Born in England, Cleary was steeped in the sounds of American roots music as a child via New Orleans funk and R&B 45s (remember those?). After gigging in the '80s as a sideman and bandleader with a rotating cast of New Orleans, best (including members of funk forefathers the Meters and delta-bluesman John Mooney), he's spent the last few years developing an international fan base as a member of Bonnie Raitt's group and in his own group, Jon Cleary & the Absolute Monster Gentlemen.

Together, Scofield and Cleary combine to create a 'bluesy, bar-stomping' duo (The Guardian) whose show in the Avalon is definitely going to be completely off the hook!