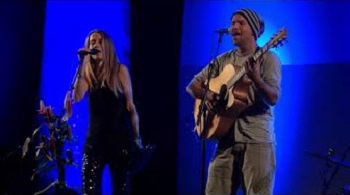 Singer/songwriters, Heather Nova and Mishka come together for their first tour as a brother-sister duo.  In an intimate acoustic setting they play highlights from their respective 20+ year careers as singer/songwriters; trading songs, backing each other up and debuting some original collaborations.

Originating in Bermuda, Mishka and Heather Nova grew up on a 40 foot sailboat built by their father.  They sailed extensively throughout the Caribbean, and around the Atlantic Ocean.  A lot of time on the boat was spent reading or listening to their parents' eclectic record collection which their mother had transferred to tape cassettes before moving onto the boat. So music took on a very influential and meaningful role in their lives.

Heather started out in London, putting a band together and getting signed in the early 90s.  Her breakthrough album came in 1994 with the critically acclaimed “Oyster”, followed by the popular “Siren”. (Many will remember her hit “London Rain” featured heavily on Dawson’s Creek.)  In total she has released 9 studio albums all of them charting in Europe where she has been based for much of her career.

Mishka’s first single “Give you all the Love” went top 40 in the UK and he has followed that with 6 more successful albums many of which have hit number 1 in the reggae charts in America. They both tour extensively throughout the world, occasionally making a guest appearance on each other’s shows.

Mishka opened shows for Heather on a recent European tour, joining her every night for the encore.

“We really enjoyed traveling together, and the response from the audience when we sang together on a few songs was fantastic, so we thought it would be great to collaborate further. We decided to put a few dates together to see how it goes. Our styles and voices are quite different, but there is of course a familial common thread, and the shared musical influences of our childhood.  So singing together always feels natural and we each bring something different to the other’s songs.”

They have also recently started writing some songs together.  Although Mishka now lives in Hawaii and Heather lives in their native Bermuda, they made the best of recent visits to their respective homes to work on new collaborative material.

Performing together on the Stoltz stage, you can just bet this brother and sister musically dynamic duo is going to make some beautiful music together!

Opening for this show is Kate Grom.
www.kategrom.com